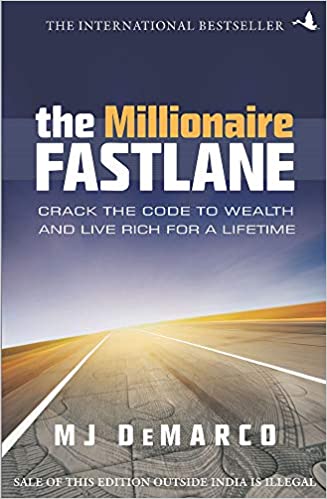 In this article, i will be elaborating summary of the book The Millionaire Fastlane by MJ DeMarco

Have you ever thought about a person who retired at 30and lived his ideal life, and you are still going to bed at 65? Do you want to retire early like this person? Do you want to drive exotic cars at an early age?

Do you want to donate lots of money to charity? If the answer to these questions is yes, then you are in the right article.

This book summary will tell you all millionaires’ strategies to retire early and live their dream life. The name of this book is “The Millionaire Fastlane,” written by MJ DeMarco; It will tell you the exact formula to live your dream life.

To understand this book has been divided into three major parts, and all three elements have been explained very closely.

From childhood, we all are taught that go to college, get good grades, get a good job and be settled, invest in the stock market, and when someday you are 65 years old, you will be rich.

The Author considered this wealth in a wheelchair or got rich slow; wealth is a process and not an event.

Ask any chef, and they will confirm that the perfect dish is a series of ingredients and a process of execution.

The Millionaire Fastlane by MJ DeMarco

Wealth creation has the same method of executing a diverse collection of many disassociated ingredients into a combined whole that has millions of worth.

The “get rich” outcome is the event; the process is the struggle of several years.

When a guy graduates from college and gets a high-paying high-paying job, he must be driving on the sidewalk. A sidewalk has no savings. He doesn’t have any medical or life insurance. The money outflow is always more significant than the money inflow means earning low, spending high. Life on the sidewalk is based on instant gratification.

If you think you cant afford it, you can. You bought the chewing gum, and it’s done. The purchase had no impact on your lifestyle or future choices, to a rich man who walks into a showroom and buys a rolls Royce without thought.

“Affordability is when you don’t have to think about it.”

The slow lane is all about a sacrifice today in the hope of a more comfortable tomorrow.

The slow lane is a job your hard work traded for your employer’s cash.

The question is simple: if I ask you to give me Rs 5 today, I will give you Rs 2 back tomorrow. So will you give me? You will say no as it’s a bad deal. Still, most people accept rupees 5 for rupees 2. They work five days a week in exchange for two days of freedom mathematically; this is negative 60%; anyone getting the consistent negative 60% on his money will soon go bankrupt.

Sorry hope is not a plan.

Why are you not rich?

Since slow lane is rooted in uncontrollable limited leverage, it will never make you rich.

To attend a large sum of money you need two things:

In a job, money is earned through intrinsic value. Intrinsic value is determined by the marketplace and is the price you can trade your time for money.

So we can say that intrinsic value is measured in time. Does this time attachment introduce the first harsh element of wealth creation: “can anyone control time”? The answer is no.

Time has no leverage. For the hourly worker, your maximum upper limit is 24 hours. Of course, working 24 hours is impossible, so 8 to 10 hours per day are traded. For the salaried worker, the thing is the same.

You cant work more than life expectancy. So a person can work 40 years or 50 years. No one has ever worked 10000 years. So it’s clear your time is limited to small numbers and cannot be leveraged.

And we all know that mathematics never lies. If leverage is limited, so is wealth creation. Small numbers do not make millionaires.

For compound interest to be practical, you need three things:

That proves that wealth acceleration via compound interest is deficient because its variables are fixed. Just like in our job, we cannot control anything; the same is with compound interest.

Can you demand your bank to pay 25% interest on your savings? Can you control the economy? Can you handle the average rate of return of the stock market?

The Law of victims:

The Law of victims says you can’t be a victim if you don’t give up power to someone capable of making you a victim. And in the sidewalk and slow lane, we have seen that you have given your power to someone else. So, according to Law of the victim, you will be a victim.

Now we have understood that sidewalks and slow lanes are not made to create wealth.

So now it’s time to see the fast lane, which can create a tremendous amount of wealth.

Story of Chuma and Azur:

Upon completing each nephew’s Pyramid, Pharaoh promises them kingship and luxury for the rest of their lives. Additionally, each nephew must construct his Pyramid alone.

They both knew that this task would take years to complete. So Azur started immediately started picking up heavy rocks and building the foundations of his Pyramid.

After one year of Azur’s work, he saw that the land on which the Chuma’s Pyramid had to be made was empty. Not even one stone was there.

He went to Chuma’s house and saw that he was building some machine. After seeing this, Azur said, “Chuma ! What the hell are you doing ? You are supposed to build a Pyramid, and you are wasting your time in building this crazy machine”.

Then Azur leaves from there and resumes his work. Another year passes, and the base of Azur Pyramid is ready, so he begins the second level but now arises a problem.

As the stones are heavy and Azur is unable to lift them to the second level. So Azur went to Benni, the most muscular man of Egypt, and Benny trained him to lift heavy stones.

After three years of serious work, Aur thought he had surpassed his brother as Chuma plot was still vacant. Then suddenly, while hauling a heavy stone, Azur hears a loud sound.

He saw Chuma troll up with a 25 feet machine. Within Minutes, the Chuma machine starts moving heavy rocks and lays the foundation of his Pyramid.

While the Azur pyramid foundation took over a year to build, Chuma built the foundation within a week. Chuma’s machine does the work 30 times quicker.

After 40 days, Chuma and his machine accomplish as much as Azur three years of heavy work. After eight years, Chuma finished his Pyramid at 26, and the Pharoah did as promised. Then Chuma never worked in his life, and he got the kingship.

Meanwhile, Azur continues to do the old work. Lift rocks, waste time and money, lift rocks, and get training. Azur has a heart attack and dies on the 12th level of Pyramid, just two stories from finishing.

The things done by Azur were a slow lane, and the thing done by Chuma was Fastlane. Sp the Fastlane is about building a better system, a better product. That will leverage your work.

To break time is to grow a money tree. Your income must not be tied to your time. When your wealth is predicated on factors that you cannot control and are limited, you will not make fast progress. The money tree is a business system, and it’s the fast lane roadmap main street.

Not all businesses are fast lanes, and many of them cant be transformed into money trees. That’s why we have given five Fastlane business seedlings that can grow money trees, and they are:

The Law of affections:

The Law of affections states that the more lives you affect in an entity you control in scale or MagnitudeMagnitude, the richer you will become. Impact million and earn millions. Net profit will be equal to the unit sold.

Again Rahul writes a book on fitness. He sells 3.5 lacs copy, and he gets rs 100 as profit on each book which means he will earn 3.5 cr.

Scale and MagnitudeMagnitude together create billionaires.

The leading cause of poorness:

People don’t choose to be poor. They make poor decisions that make them poor. The smallest choices made in our daily life creates habits that form processes; they are the one that can make the biggest impact.

We must not listen to the naysayers, mentioning the people who are always pessimistic. If you want to push beyond average results produced by ordinary people, you will need to adopt a unique approach that doesn’t fall in favor of “everyone.”

You will bear rich and die broke:

Time is like fuel. You were born with a full tank of gas. There are no refilling stations. The people’s biggest problem is to act as if our time on this earth is infinite, which it isn’t.

The reality is that time is deathly scarce, while money is richly abundant.

And yes, now there will be a group of people saying how everyone can get an education? The point is education is freely available, but people don’t have a curiosity to learn.

In today’s scenario, most books will cost you less than RS 300.

Most of the library is available within a 5 Km radius.

If you want to know if the business which you are doing or planning to do is a fast lane or not, then here is the Fastlane commandment.

While in starting, if you do not obey all the five commandments, you can still create wealth quickly, but you must look for a road satisfying all commandments.

The Commandment of control:  This rule states that you must have full control over your product, your marketing campaign, your revenue model, and your operational choices.

As a fast-laner, you can start any business, but eventually, you must strive for automation.

The Commandment of scale: Your total pool of customers means your habitat. The larger the habitat, the greater the potential for wealth. To achieve scale, Magnitude Magnitude (unit profit) or reach (units sold) must increase.

Internet: The internet is the best Fastlane available because it immediately obeys the five Fastlane commandments.

It is a good old fashioned way to become rich:

Manufacture: invent a product, service, manufacture it and then distribute it. Innovation involves two acts, Manufacture and distribution.

For example, there is no scale when a real estate investor buys a single-family home and later rents it.

That’s it for this summary of this book.

Buy Now from Flipkart
Buy Now from Amazon
In case you find this article interesting. Would urge you to please go through my other articles.
7 Assets That Make You Financially free | How To Get Rich? – FINANCE-BHARAT (financebharat.in)